Baby It's Cold Out by Virtual Personal & Nash   If that girl hadn't been good enough to merit an invitation back to Spike's place, then Xander would never be, even if Spike magically turned gay.

Blackfoot Bertha by Dragon's Phoenix   If you're good, you get presents; but if you're bad.....

Chaos Christmas Crackers by Werewindle   Spike and Ethan help each other plot a little Christmas cheer.

Chilled by Kimalis   At this point in time, Spike was happy to just watch and want. Take and have would come later.

A Christmas He Won’t Soon Forget! by LadyMerlin   Pet Xander has a Christmas he will never forget (1st part of a 14 part series)

Christmas Pets by WarpedMindedYaoi and NightmareAhead   It’s Christmas time for puppy Xander and kitten Spike.   Sequel to I Bark, You Hiss

Doing Christmas by Lazuli.Kat   "I semi-do Christmas. For the perishables, the aqua vitae, and the seasonal rejection."

Drawing Near by Apreludetoanend   Christmas Eve, post-Chosen. Xander and Spike are preparing for an evening out with the gang, with whom Xander has some news to share.

Drummer Boy by Dragon's Phoenix   Willow is due to arrive in half an hour. And Spike knows it.

Eight Maids, Uh, Milking? by Crazydiamondsue   Early Season 7 AU, Spike and Xander are together, but Xander’s still got things on his mind…

Frostbite Falls by Emelye   The whole gang gets together for Christmas. There are some disclosures made.

The Gift of Christmas by Suki Blue   Spike gives Xander a Christmas he's never had, but always dreamed of.

Gift Exchange by Whichclothes On a whim, Xander buys a Christmas present for Spike, and the gift has unforeseen consequences.

If Wishes Were Horses... by Cimmer   A perfect Christmas

In A Strange Land by Pirate Purple   Christmas in Africa

In A What? by Chess   Spike finds a surprise in his xmas stocking

The Joy Of Giving by Lazuli.Kat   Spike survived the battle in the alley...in a way.

Merry Christmas, Luv by Charmin   Very dark fic but has a hopeful ending

Mistletoe by Kayla   It's a tradition

Mistletoe Kiss by Dragon's Phoenix   It’s bad luck if you don’t kiss under the mistletoe.

Mistletoe Kisses by Amy   Xander is being followed by enchanted mistletoe

Naughty Nick and the Evil Elf by Tisienne Blue   Ah, X-mastime hijinks on the Hellmouth   X/S/William

Not What It Looks Like by Spike 1790   Spike finds Xander in a compromising situation.

Old Habits Die by Strickensgirl   Xander had always spent the night before Christmas outside in his sleeping bag.

O magnum mysterium by electricalgwen   Spike angsts over the meaning of Christmas. A companion piece to the Easter fic Resurgens

Phoenix by Whichclothes   Sequel to The Wednesday Museumbut can be read on its own. Xander and Spike attempt holiday-season travel.

The Poinsettia Protection Posse by Jasonsnene   It was truly amazing what one could acquire with a bottle of Jack Daniels, a carton of cigarettes, and a box of Twinkies. In Giles’ case, he acquired one vampire and one young Watcher   S/X/Giles

The Scent of Gingerbread by Margie   Xander starts some new holiday traditions with Spike.

Spike Claus by Forsaken2003   Spike does his good deed for the year.

Surprise by Apreludetoanend   Xander gets an early Christmas gift.

That Old Silk Hat by Eliza Shaw   Spike and Xander chase down a demon in the midst of Christmas on the Hellmouth.

Time Out by Kimalis   Don't piss off a witch

A Very Naughty Christmas by Margie   It was in a weird shape, kind of like a really big piece of candy.

What's In The Box? by Darkhavens   Xander receives an unexpected parcel.

The Wild Hunt by Whichclothes   Vampires do not celebrate Christmas, but maybe they can celebrate something else instead.

Workin' in a Winter Wonderland by Whichclothes  Several years post-series, Xander returns to California to go undercover as an elf--and encounters several surprises.

Yeah by Spike_1790   A conversation between the boys at Christmas. 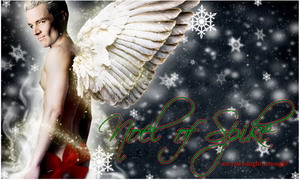