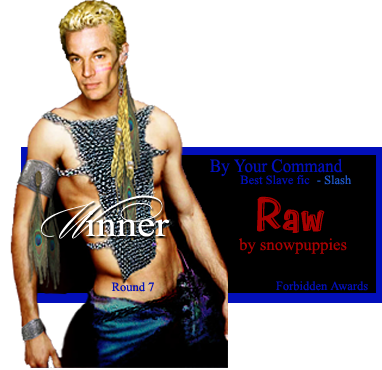 More than the rapes, more than the fact that he’d been seen naked by most of Sunnydale’s demon population (and a fair bit of the human one), more than the beatings, even more than the sticky mess that seemed to be a permanent fixture on the back of his thighs…

He couldn’t stand that damn collar.

Truth be told, he’d never liked anything too confining around his neck, not since her… At least that’s when he noticed it; if the problem had existed before, he couldn’t remember.

Since then, he’d always made a point of buying shirts a few sizes too big for the extra room. Even so, he was always careful to stretch the neckline before he’d put it on, just in case.

Once Willow had bought him a necklace—one of those college-trendy things that he’d never in a million years be able to pull off—and he’d tried, really tried. But it started to rub, and he could feel the skin start to pinken and chafe beneath the clasp and, somehow, it seemed to shrink and then it was cutting into him and hecouldn’tbreatheand… When she’d asked about it a week later, he’d told her it had been the victim of a vampire attack—yup, her present had saved his life, sadly, at the loss of its own.

And now he was stuck with this…thing, rubbing and pinching and scraping against his skin. He’d taken it off once, in the beginning, but had been beaten so severely he’d not slept for a week. It had been re-fastened, with the addition of a tiny padlock, and he’d not attempted to remove it since.

He was a pet, a plaything, a fuck-toy, paraded around wearing only that fucking collar, bite and scratch marks marring his torso, his ass covered in harsh red handprints, and a rainbow of fingerprint bruises decorating his hips. It was obvious what his purpose was, and he was aware of every gaze that passed over his skin, could feel every leer as it traced the outline of his muscles, his ass, his cock. He blushed at the shame that they knew how he spent his nights, his days, they knew that he spent more time with the Master’s cock in his mouth than he did eating, they knew that he spent every evening spread open in the Master’s bed while the Master fucked him raw. And they knew that he came every time.

He could hardly believe it was his life, and he’d been miserable until he’d noticed something: week in and week out they came, demons and vampires and humans alike, offering themselves to the Master. Male and female and a few he wasn’t sure had a determined sex, large and small, petite and hulking; no two alike, but they were all dismissed with the languid wave of a black-tipped hand or a tired roll of impossibly blue eyes. One night, after the Master had waved away the most beautiful woman he’d ever seen, vampire or not, it hit him: the only one ever to share the Master’s bed…was him.

He thought about it later—arms lashed to the headboard, knees bent to his chest as the Master rammed into his spasming body—and it almost made him feel…special. He belonged to the Master, the black leather biting into his neck proved that, but, in a way, the Master almost belonged to him. When a pair of nimble fingers slipped beneath the buckle and twisted he jerked and came, spending on the silk sheets and collapsing, his Master’s weight pressing him into the mattress. He lay there and almost enjoyed the coolness inside that was slowly seeping out onto his thighs and dripping on the bedclothes.

After he’d started paying attention, it was obvious; each and every time, his Master would reach for it, slim fingers twisting the leather until he couldn’t speak, couldn’t breathe, and he would feel his Master’s release and discover he’d come as well. Then one day, when he’d been required to perform before his Master’s guests—jerking himself off, center stage—he discovered he couldn’t…just couldn’t seem to get over the edge, so he reached up, fingers trailing over super heated flesh, stopping briefly to scratch at hardened nipples, then up farther. He found his gaze drawn up, brown eyes locking with blue, as his fingers gripped the collar, pulling and twisting, and he couldn’t look away and he was pumping furiously and twisting and tightening and then he exploded, nearly falling to his knees at the sensation.

Then lust-fogged blue eyes blinked and he did fall to his knees, between his Master’s legs, nuzzling and mouthing at the bulge in his Master’s pants, whimpering as one soft hand wove itself in his hair and pulled him away and moaning when the other unzipped his Master’s pants. He sucked his Master’s cock straight down, tonguing and swallowing the engorged shaft, and he realized that he…loved this. Loved belonging to such a powerful person, loved being the only one allowed to stay with his Master during the vulnerable hours while he slept. Loved the gasps and groans and harsh, panting breaths that came from his Master’s mouth when he squeezed his muscles or swallowed around the swollen cock in his throat, loved the soft snores that always woke him mid-morning. He…loved…his Master.

The realization swept over him at the same time that the salty fluid gushed down his throat. Closing his eyes and humming softly, he licked the softening organ clean. Prompted by a caress, he glanced up into kohl-rimmed eyes and realized…that his Master cared for him, too.

That morning he woke, his Master draped over his chest, one long finger tucked between the collar and the hollow of his throat, and realized he’d never before been as content, as loved. Sighing, he extracted one arm from his Master’s grip, gently stroking the now worn leather around his neck. He supposed he even loved the damn collar—he winced as it rubbed against a particularly raw spot—nearly as much as he hated it.