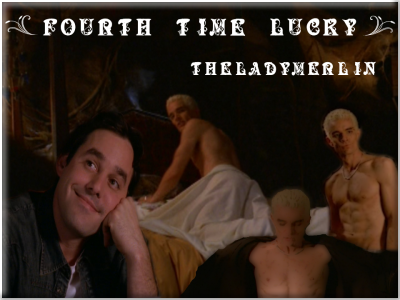 He remembered the first time the boy had walked in on him unannounced. It had been during the time that Geeky Trio had used some kind of ray gun to make the Slayer invisible. Harris had barged into Spike's crypt, Spike's home, searching for Buffy. The boy hadn't exactly found what he'd been looking for but he did get an eyeful. At the time, Spike had been too busy hiding what he'd been up to, to notice the other, lighter scent underneath the more overpowering scents of Buffy's and his own arousal. Spike supposed that even if he had noticed, it wouldn't have mattered to him all that much. Back then, he'd only had eyes for the Slayer.

The second and third time Spike had been living with Harris. At least it wasn't in that laughable excuse for an apartment in the Harris basement. It also didn't contain an ugly chair of pain. It did, however, contain a closet. And a shower. Both of which the boy had taken to barging into whenever he damned well pleased, claiming some rot about houses and kings. Like any Harris in the history of any world had been a King. It was so fucking, totally unbelievable. The boy just liked to be awkward. And, apparently, a bit kinky if the barging in and staring with his great gob hanging open was any indication. Of course, back then, Spike had been a bit distracted too. The new soul had taken some getting used to and he hadn't been paying that much attention.

Spike hadn't really thought about Harris much over the years. But every once in a while, when the mood struck and he was reminiscing with only a bottle of booze and his left hand for company, Harris would occasionally get the starring role in Spike's fantasies. Spike may have been a bit distracted now and then but he did manage to notice all that tanned skin and the rippling muscles earned from hours of hard work under the Californian sun. He'd recalled large hands which would be perfect for stroking along Spike's skin and cock, and eyes which Spike was sure would darken and spark with arousal.

And now, here, once more back among the Sunnydale crew, Spike padded naked out of the shower, only to stop when his door swung open and Harris boldly walked in the room, tallying up number four. They both stopped and stared. And that's when Spike noticed.

His vampire senses suddenly recalling a familiar scent even if he'd been so distracted at the time that he hadn't consciously noted it. A scent which made his mouth turn up on one side in a knowing grin.

Xander didn't blush but his tongue swiped across his lower lip and he fidgeted a bit before clearing his throat, smiling and giving Spike a little wave.

Spike spread his arms when Xander merely continued to stare with that silly grin on his face. "Like what you see then?"

Xander surprised Spike when, instead of turning tail and running out the door, he took a step closer and spoke in a strong, clear voice. "Yeah, Spike, I do."

Spike scowled back. He couldn't believe it. After all these years. "You gotta be kiddin' me."

Xander's confidence faltered. "I-I'm sorry if you're mad because I..you know, like you ...like that. It's just-"

Spike closed the distance between them and slid his arms up over the strong shoulders. "Shut up Harris," he growled, before swooping in for a searing kiss, "already wasted all that time when we could've been doing this."