Pairing: Spike/Xander
Summary: Spike and Xander contemplate
Rating: PG-13
Word count: 352
Disclaimer: These characters belong to Joss Whedon, Mutant Enemy and all companies associated with Buffy the Vampire Slayer. They are not mine. I just have more fun with them.
A/N: For 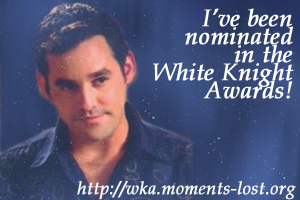 
He stares at the boy from his shadowed place underneath the Magic Box stairs, unseen and unremarked upon, at least until Buffy notices and chases him out or presses him into thankless demon-slaying service, and wonders what it is about Xander that makes his spine ache, his stomach knot, his unflowing blood burn hot and his cock stir. Xander isn’t so smart, isn’t so handsome, isn’t kind to him, but there’s something there, something that can almost fool him into believing his heart can thump. Just occasionally, just now and again, just every time he comes across the kid unexpectedly, every time it looks like Xander’s about to put himself in harm’s way again.

Stupid boy can’t seem to keep out of trouble. If he’s not being possessed by some zoo animal, he’s falling for someone totally unsuitable, someone who’d eat him as soon as look at him. And not in the good way. Spike knows all about the good way and he’d be pleased to demonstrate but every time he opens his mouth to explain this to Xander, in words he’s practiced again and again and knows deep inside are the perfect tool of seduction, they come out as gibberish, Xander looks at him like he’s a bug and Spike slinks away.


Xander can see Spike from the corner of his eye, hiding out in his usual spot. He idly notices that the top of Spike’s head is exactly aligned with the ninth step of the staircase and wonders if there’s some cosmic significance in that. Maybe it’s a sign he should go over there and say hi to Spike in exactly nine minutes, strike up a real conversation that doesn’t include deadly insults and promises of staking. Or maybe he should obey the instincts that have consumed every waking moment since he first laid eyes on Spike and grab him by the wrist and drag him somewhere, anywhere they can be alone and… His imagination fails at that point, but he’s pretty sure Spike will know what to do next.