Pairing: Spike/Xander
Rating: PG13
Feedback: Suit yourself, just no permanent damage, k.
Disclaimer: Just playing with the pretty kittens. Unfortunately, they are not mine, but I will gladly groom and bathe them before sending them back home to Daddy (aka Joss/Mutant Enemy/et al).
Warnings/Squicks: turning, angst, schmoop, this was pretty much written on the fly so don't expect fine art, k.
Summary: Some befores and afters of Spike's life 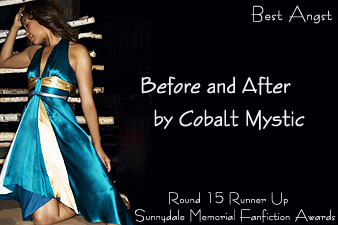 Before he saw her, he thought his world was his words.
Before she tore him apart with her flippant disregard, nothing but the words and her presence mattered.
Before the dark stranger made him hers, beauty was an abstract thought, grace was anything but him, and belonging a sensation of dreams.
When she came to him, he thought himself frail, weak, unworthy- all the things the other woman had made him feel in that one short exchange.
When she spoke to him, it was as angels singing, knowing the words of his heart, knowing his desires, his soul.
When she took his life, it was ecstasy; all the fear and pain draining from him along with his blood- the notion that losing everything including your life and your soul could make you whole was beyond his meagre human fathoming.
After he awoke, he desired only blood and love.
After he first fed, his body soared with the feelings- his mind raced with the power, and thrilled with the fear- he was ALIVE.
After the bloodlust past, he knew he belonged, knew the world would bow to him.

Before the Hellmouth, he and his Princess were happy, bathing in the blood of the innocent and the not so innocent.
Before Angelus returned, his world was his own, his Sire his own, his body his own.
Before escaping the Hellmouth, he had no doubt as to his place in the world, no doubt as to his love and loyalties.
When he lost his Princess, he lost his direction.
When he returned to the Hellmouth, it was to start anew- a new kill, a new Slayer, a new him.
When he was captured and tortured, he thought only of revenge.
After he escaped, he was driven to his enemies.
After the Chip, he prayed for death- he would not be THAT weak creature again.
After awhile, he began to accept, to change, to be the man he once was without the fear and self-loathing.

Before they kissed, they fought- fought with the weapons of his youth, the weapons of words.
Before his boy, he’d forgotten the joy of the language.
Before his love, he thought he’d known acceptance.
When the boy’s friends found out, all hells broke loose- it wasn’t right, wasn’t natural, wasn’t HIM.
When explanations failed, and threats were made, he left his love, his light- he couldn’t do this to his boy.
When it was done, he knew he would never be worthy of his boy.
After the Trials, he returned to watch over his boy, never intending to be known.
After the Slayer discovered the truth, he begged her for silence or a quick death.
After she left, he began to write.

Before the sun rose, he finished the letter.
Before he died, he would give one last gift to his boy.
Before the end, his boy would know the depths of his love.
When he arrived at the apartment, he was surprised to see the lights on, and his boy with company.
When his pain threatened to break through, the door opened.
When eyes met, all else faded.
After the tension, they fell into each other.
After the fear, they caressed and cooed.
After their reunion, they were never parted.