Bargain by Katharina   As a reward from the PTB, Spike is allowed to take one of the Scoobies as a pet, but Xander spoils his plans by 'volunteering' himself.   WIP

Beautiful Broken by Litgal   Xander disappeared six months ago, Spike finds the missing boy in the underground slave markets and he's changed greatly in his time away.

Belonging by Trixx   Xander is a master of discipline.   wip

Bought and Paid For by Skargasm   Bought and paid for, but for what purpose?

Boy by Spikedluv   AU Prior to Buffy’s arrival in Sunnydale, Xander is captured by vampires to be sold as a human slave.

Caught by Margie   Spike catches Xander unawares. And then the tables get reversed.

Choosing by Lady Cat   ...because at this moment, for the first time in all the years Spike could remember—William had a choice.

A Christmas He Won’t Soon Forget! by LadyMerlin   Pet Xander has a Christmas he will never forget

Colors Not Found in Nature by Cicirossi   Xander gives Spike a good spanking, ostensibly as punishment

The Contract by Margie   Xander agrees to become Spike's property to keep his friends safe from the newly de-chipped vampire.   wip

Crush by Margie   Xander has a crush on Spike, and Spike knows it.

Demagnetized by Creyr   Willow demagnetizes Xander from every demon but Spike.

Dread of Morning by Lady Cat & Wesleysgirl   He wasn't going to last long with a dominant Xander giving him all the fantasies he'd forgotten he'd had.

Elderly Pets by Josie   Bitter/sweet story set in a dark future world where the demons won, and humans are pets or slaves.

Figured You Out by Lady Cat & Xanphibian   There's a club. And some sex. A bit of jealousy.

Flailing through the Cliches by Lit Gal   Xander goes after what he really needs. Series of short stories detailing the training of Xander

For the Love of My Brother by Sharvie   Human AU; 29 year old Xander is a successful businessman but he also lives as a sexual sub to his stepbrother’s alter ego, Spike.   unfinished

Gentlemans Night by Lady Cat   Xander never told anyone that the night he was forced to strip was Gentlemen’s Night.

His & His Alone by Skargasm   Time for him to be marked as his, and his alone...

The Hour Series by Yin Again   Spike knew that the kid had a mean streak.   Preview

Hurt So Good by Jasonsnene   Spike has created a monster

Itch by Lady Cat   Spike has a problem, to Xander's benefit

Just Enough by Wolfshark   Spike is Xander's, to do with as he pleases.

Keeper by Lady Cat and Xanphibian   Xander's through with waiting around, now he's going to take.

Kick and Slide by Yin Again   Xander has to pretend to be Spike's pet. WIP

King of Non-Sequitopia by Misanthrope   Spike has a lot of emotional baggage to work through. Can Xander give him what he really needs?

The Labyrinth by Rowaine   With the destruction of his hometown and subsequent dispersal of the Scoobies, Xander finally has the chance to grow up... and grow into needs he never realized he had.  Unfinished

Late Night Double Feature by Kimberly   sequel to A Jump to the Left   Xander is now obsessed with an oblivious Spike.

A Lesson In Respect by Nash   Spike takes his punishment

A Life Less Ordinary by C. Woodhaven   Xander struggles against not being normal, but not being supernormal either. He finds some comfort being dominated by his two lovers, Anya and Spike...but will it be enough?

Loyal and Gentle by Josie_H   A portal misfire results in Xander changing places with his Pet!Xander twin.

Making Peace by Charmin   In order to make peace with Xander Spike offers Xander an opportunity to get even.

Master by Queenie   Spike and Xander fell through a dimensional rift into a slave world where Vampires rule.

Master and Pet by Amejisuto   Xander offers himself to Spike as a Pet.

Observations by Maz   Spike and Xander go to a club and Xander... looks around.

Old Blood by Dustandroses   When Spike and Xander accidentally get caught up in a dangerous spell, it sets them on a course that could have deadly consequences for them both.

Pervasion by Wesleysgirl and Jane Davitt   While Xander's away on a trip, Giles gives Spike something he's been missing.   Sequel to Saturation

Pet by Nash   Spike wants one last thing before he leaves Sunnydale.

Power Switch by Skargasm   Powerless or powerful - it's all in how you look at it....

A Puppy For Spike by Spikedluv   Angelus gives Spike a puppy

Puppy Love by Perverted Pages   Dru had been so insistant he find a puppy to bring home.

Quarry by Lady Cat   Spike would be the hunter again, his prey properly submissive.

Release by Queenie   Nobody said the soul would last forever.   S/X/A

Reparations by Lady Cat   Spike makes up for giving Xander a fright.

Roleplaying, not Living by Lit Gal   Xander was not into being Dommed by just anyone, thank you very much

Secrets by Edibbea   Spike works out what Xander needs
(("I could smell the arousal coming off you in waves when the Watcher explained how Masters feed - how I feed. I could feel your eyes on me."))

Something Different by Queenie   Spike decides to try something different.

A Tale of Literature and Lust by Akasakasan   Literature teacher Mr Bradshore, nicknamed Spike by his students, decides to take his student Xander in hand and have some fun along the way.   Warning: Underage Sex

Test Drive by Nash   In an alternate universe Vampires are household slaves.

Thrall by Margie   Spike uses his Thrall to get what should always have been his.

To Be His Boy by Darkling Dawns   The first time he'd been told to ask for that, he'd stammered and balked   Preview

Toys by Lit Gal   In the Basement of Doom, Spike is bored, and Xander is there.

Trespass Sweetly Urged by Sevendeadlyfun   After cheating on Cordelia with Spike, Xander followed him when he left Sunnydale, and has been living as Spike's pet/slave/toy for two years. S/X/Dawn   warning: Under-age Dawn

Trust by Xanphibian   Xander gets to act out his fantasy

Unacceptable Losses by Eliza Shaw   Spike must save Xander from yet another demon, but more importantly from himself in the wake of destructive guilt for killing Buffy.  WIP

Untitled Vibrater PWP Story by Lady Cat   It's been two days since he's come last, the longest Spike has made him stay hard yet.

Watcher Kink by Nash   Spike has a kink, Xander tries to help him satisfy it. S/X/Giles

Why Spike Can Be Submissive by Lady Cat   Buffy can't understand Spike being Xander’s submissive.

Why We Love Willow by Lady Cat   When Willow made Xander a demon Magnet, Spike's demon was attracted too.

Xanpet by Siege Spikess   Spike makes a wish, Xander finds himself back in time, living with the Scourge of Europe as their pet.

You Don't Know What You've Got... by Cimmer   His pet knew better than to run off, so where was he?

You've Got Male by Darkling Dawns   Spike feels it's been too long since he's tortured Xander...

Behind Closed Doors by Jane Davitt   I was still hard; Giles hurting me did that every time   Spike/Giles

Descent by C. Woodhaven   Spike is drawing Dawn down a dark path   Spike/Dawn

Double Bluff by Ash Carpenter   Angel fantasizes about his brother and tries to find a way to get physical with him. He succeeds beyond his wildest dreams... Human AU   Spike/Angel

Gonna Make You Mine by Spank Spike   James and Nick previously had a brief "fling". Nick feels the need to see him again. RPS ~ JM/NB   Sequel to Shattered by Sevendeadlyfun

A Grave Man by Twilightofmagic   How Spike came to be there, face down on his bed and artfully trussed was neither here nor there.   Spike/Wesley

Spike/Giles Kink Series by Eyezrthewindows   Spike can't get in a wank for all the people running in and out of Giles' bathroom. What's a chained up vampire to do?   Spike/Giles 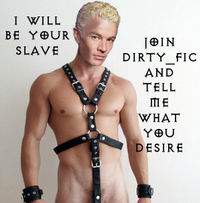