Pairing/Characters: Spike/Xander
Rating: R
Warnings: Angst!alert - not that the title didn't clue you in...
Summary: Xander makes one too many mistakes.
A/N: Thanks to

spikesdeb for pretty-ing things up for me. Excuse my post-readthru fiddle, it's a habit. *sigh* Mistakes are all mine... see anything amiss, whisper in my ear, would ya? Written for 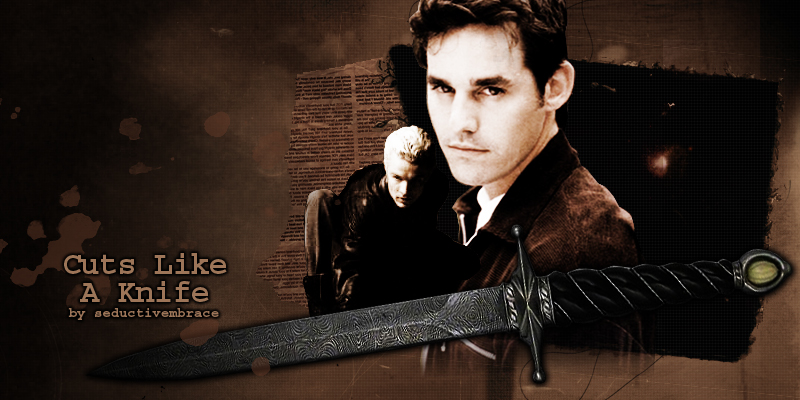 
He steps inside the room and stares at you with a predatory gleam in his eyes and you swallow hard around the sudden lump in your throat. There’s nothing safe in the look and you know you’re in for a world of hurt.

You open your mouth and try to explain, but the handkerchief stuffed in your mouth and tied around the back of your head keeps you from getting the words out. And what’s worse, the muffled sounds emitting from around the gag just seem to piss him off… if the fierce scowl on his face is any indication.

You apologize once and shut up. Hang your head in shame because you’ve obviously screwed up. Again.

You’re proven right when he turns around and leaves the room, slamming the door behind him. You sigh heavily, but silently, because you’ll be damned if you make another sound – at least not until he lets you. Tears prick your eyes.

You wonder why you keep fucking up, and you have plenty of time to think about it as you’re left alone for several hours. Unfortunately, nothing comes to mind but a long line of Harris failures. Yours and the rest of your family’s. Successful relationships just don’t seem to be in the cards for you.

Your shoulders slump as the truth of it washes over you. You feel a tug at your wrists tied tightly to the bedpost and needles of pain snake down the length of your arms gone numb from being held in such a position for so long.

It’s nothing compared to the ache in your heart because you know you’ve lost Spike for good this time.


The smell of a fresh-made burger wakes you and your stomach rumbles loud in protest at having gone so long without food. You open your eyes and are surprised to see the plate on the bedside table along with a glass of milk, and that your arms are free of their restraints. A quick glance about the bedroom reveals that it’s just as empty as it has been all day.

You want nothing more than to bolt from the room, search out Spike and fall to your knees at his feet and beg for forgiveness, vow that you’ll never be so stupid, so thoughtless again. You don’t though, and instead reach for the burger and fries after yanking off the handkerchief tied around your mouth, wolfing everything down in a matter of minutes.

After a quick trip to the bathroom, you’re back on the bed in the same position as before, gag once more firmly in place. Waiting. The food has started to settle in your stomach and you’re pleasantly full. Boredom sets in and the quiet soon has you closing your eyes and drifting back off to sleep.

The next time you wake, your arms are retied to the bedposts – with considerably more slack this time – and Spike is sitting on the edge of the bed, one hand idly stroking your bare leg.

You lift pleading eyes to him and swallow a gasp at seeing his demon still prevalent. He’s staring off in the distance, apparently deep in thought. Your eyes well with tears again. One manages to escape and makes a lone track down your cheek.

He’s still mad; his anger over what you’ve done, the near-fatal mistake you’ve made, has made it impossible for him to hide behind his human mask. You wish he’d just punish you and be done with it. At least then, you would know you were forgiven. The fact that he’s done nothing but tie you to the bed and left you to stew speaks volumes.

His hand stills and he finally deems to look down at you. His eyes are cold, emotionless.

“What am I going to do with you, Alexander?”

His indifferent, cultured tone sounds too much like Giles and not the Spike you’ve come to know and love. The Alexander sends a chill down your spine. He’s never addressed you so formally before… except for the once. And then it had been said with such reverence, as befitted your claiming ceremony.

“Punishing you doesn’t seem to work. You just turn right back around and throw yourself headlong into danger.”

You want to deny it, but know he’s right. Buffy calls and you come running. Spike is still speaking, and you concentrate on his words. When you do, ice fills your veins and you start to shake.

“You care not for my feelings… Better I should release you from my claim and let you go about your way.”

You shake your head frantically. No! you scream silently. You kick out and your foot connects with his stomach.

Spike doesn’t do anything. No wince, no flinch, no smirk. Nothing. He just stares at you – through you – like you don’t even exist to him anymore.

No! And this time, it’s screamed around your gag. To hell with his demand that you not speak. You refuse to let him have the last say in this. Refuse to let him end your relationship. Because you love him, and you can’t live without him.

I love you! The muffled words are easily discernible even with the cloth stuffed in your mouth. Tears are streaming down your face. You pull at your bonds, but though they are loosened, they still hold.

“Alexander,” Spike continues, like he didn’t just hear your declaration. “You are no longer my claimed.” A knife seems to materialize in his hands and you wish he’d just cut out your heart in truth, because the words he’s just spoken have killed you inside. Instead, he cuts through one of your bonds. Then he stands and walks out of your bedroom, out of your apartment. You don’t even hear the door shut.

You pull and tug at your remaining bond and eventually manage to free your other hand. Then you hurriedly pull on some clothes and race from your apartment, praying all the while that you’re not too late, that you can fix this thing between you and Spike.

By the time you get to his crypt, he’s long gone.