Fandom: Torchwood
Disclaimer: All Uncle Rustyĺs. No profit.
Pairing: Jack/John
Rating: NC-17
Summary: Total PWP. You probably don't even need to have seen the show, just my icon.
A/N: Thanks to Fod & LFD for beta and encouragement. 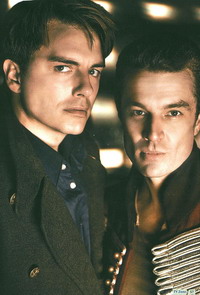 The fist to his face is not unexpected.

Hard knuckles against soft flesh, unyielding thump of bone; just as solid and satisfying as the teeth in his bottom lip, as the cock pressing into his thigh. An interlude, a string of moments in silver and glass, where Jack is very nearly alive.

It ends with Jack ass up over the bar.

It begins with Jack ass up over the bed.

On his elbows and knees, muscles trembling to stay upright while John runs the flat of his tongue over the back of Jackĺs thighs and then just keeps going.

It's the only time John is ever quiet.

When that damned tongue is busy, doing something other than listing every filthy detail splayed out in front of him; a pornographic commentary about the size and shape of Jack's dick, or how greedy Jack looks now, naked and spread open, curling both of his fists into the sheets.

When John is quiet, it makes Jack nervous.

He twists his head around, craning his neck at an uncomfortable angle.

John smiles - all of his teeth bare and white, like the moment before a Rift opens, before everything changes again.

"Aw, Jack,ö he says, tilting his head. ôDon't you trust me?" He has eyelashes that mimic innocence the way a crocodile mimics tears.

"Hm. No," Jack grunts, just as two fingers pry him wide. Johnĺs tongue presses against the inside of his own cheek, an obscene tell for what he is about to do to Jack.

"Guess you'll just have to keep one eye on me then," he says. And he's still smiling as he bends his head.

He fucks the same as he fights, all big guns and manly swagger, too much and never quite enough. He holds Jack open and drags the tip of his tongue across secret, pink skin, he makes hungry sounds like devouring ripe fruit, he holds Jack still, in place and time, on the axis of his hands.

By the time he shoves his cock inside, Jack canĺt hold his head up; he presses his cheek against the curve of his arm, and mutters curses there.

John laughs, snakes and sweet, sweet syrup. ôWhat would those pretty little children say, if they could only see you now, do you think?ö

Jack thinks instead of the sound John will make when he next hits him, that gasp, harsh and surprised. He imagines the way John will fall, kneeling at Jackĺs feet.

He comes across Johnĺs fist, the sheets, the pillows, his own stomach. He even cries Johnĺs name.

ôYou always looked so pretty on your knees, Johnny,ö Jack tells him. He rubs the head of his dick across the sharp slash of cheekbones, leaves wet, shiny trails he can follow later with his own tongue. Every time he brushes across Johnĺs lips, they part, trying to draw him inside.

Jack tries each time not to gasp.

He holds Johnĺs head still with a handful of curls. ôThere was a scientist in the 19th century, Freud his name was. Had this whole theory about oral fetishes.ö

John quirks an eyebrow at him. ôThat so?ö he says, and Jack nods.

ôIf you come on my face, Jack, l will bite your dick off.ö

Jack crooks his thumb in the corner of Johnĺs mouth, pulls his jaw open. The quick hot slide around his cock makes his eyes want to close. John takes him to the back of his throat, sucks in a breath, and swallows once.

Jack nearly shouts. Their weapons lay in a careful heap by the door. Heĺs never been able to resist a challenge.

They pass a bottle of Scotch between them, sheets torn and tangled around their ankles. The bed is completely destroyed. John traces a bruise the color of his waistcoat along Jackĺs thigh.

Jack is still in possession of his dick.

John takes a swallow of liquor; watches Jack watch his throat move. ôRemember,ö he asks, ôin Madrid, that little stairwell behind a school? It was winter time, and all the icicles on the roof shook when I fucked you?ö

ôNo, I remember winter in Madrid, a little stairwell, and I was fucking you.ö

ôSure,ö Jack says, touching the tip of the bottle to the tip of Johnĺs nose. ôThat was never the problem.ö

ôWhich one of them is it, then?ö John asks; he sounds almost bored now. ôThe one with the big eyes or the one with big tits?ö

Jack sits up, knocks his knee against Johnĺs chin only partially by accident. ôShut it,ö he says, warning flares in his voice older and more heated than them both. ôYou donĺt know anything about me, not anymore.ö

Johnĺs jaw is already turning yellow and blue. Jack can still feel the shift of his ribs where John landed his best punch back at the bar. And theyĺre both a little too drunk.

This fight lasts only half as long as the first. It ends nearly the same. Theyĺre panting inside a puddle of spilled liquor, only this time John is on his back.

John, on his back with Jackĺs cock high inside of him; smiling and shining, stinking like sex. His legs are thrown over Jackĺs shoulders, his eyes are squeezed shut. His bottom lip is still bleeding. Jack can not stop staring at it.

ôWell come on then, damn you,ö he snarls, digging his heels in, arching his hips up, dragging a gasp from Jackĺs belly. ôIĺm not some skinny boy in a cheap suit. Make me feel it.ö

He pulls back on Johnĺs frustrated whine, grabbing Johnĺs ass in both hands, lifting him higher off the bed, shoving himself deeper inside. And he makes John feel it: every year, every memory, every hurt and loss, every godamned fucking inch of him, slow and painful and certain. Until John twists and shoves back; and the long line of Johnĺs body unfolds beneath him, white, endless, and familiar as snow.

Then Jack has to close his eyes, because Johnny has always been able to make him come so hard, he can almost imagine heĺs lost track of time. He falls forward like something inevitable, like gravity or death, but Jack is not a part of any of those things anymore, and he never does forget that.

He lies there for a while, crushing the breath from Johnĺs lungs.

After, John is a damp bit of chaos draped across his chest, finger painting crude symbols in his sweat. ôWhy Jack,ö he says, his voice slurred around a grin, ôIf I didnĺt know any better, Iĺd say you were still cross with me.ö

Theyĺve finished the scotch. Jack sets the bottle carefully on the floor, but it rolls away from him anyway, with a clanging that sounds like bells.

John stands, stretches his arms over his head, and begins to tug on his pants. Jack doesnĺt move, just watches as John straps the holster over his hips. He comes back to bed without a shirt, stares down for a moment into Jackĺs face. He looks almost vulnerable when he leans in, but Jack knows. Hooded eyes can mean either a kiss or a snakebite.

ôIt doesnĺt have to be this way,ö John whispers, against Jackĺs lips. Heĺs sweet like malt and salty like come. Jack opens his mouth, and lets himself be kissed.

ôYea, it does,ö Jack says, just as quietly, when he finally pulls away.

The fist to his face is not unexpected.